In 2014, three infrared cameras for mobile devices entered the market:
Here I give a quick review of these products. To allay further suspense, let me just give the bad news: of the three only Therm-App is useful for birding.

What I consider "useful for birding" is for the device to help detect a subject that would likely go undetected otherwise. This means roughly the ability to notice and highlight a hawk-sized subject at a distance of 100 feet (30m), at the minimum, since wildlife rarely approach closer than this, and when they do they can usually be spotted with the naked eye of an averagely observant person.

Note that I use the word "highlight", because it isn’t sufficient to just detect the subject. An infrared image of a forested scene looks rather messy, like this: 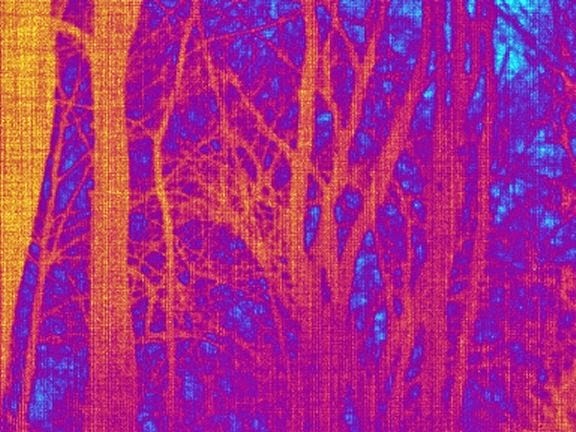 and it is not helpful to say that the few pixels in the upper left is a bird if it can’t easily be distinguished as such.

FLIR One, which fits only the iPhone 5 and 5s (support for Android and other iOS devices coming soon), is the first mobile-device attachment to come from the leading name in IR products. Its $350 price tag is much lower than any other FLIR product, but alas, it has a rather pathetic resolution of 80x60 pixels. On my first field test with the device on a cool November morning, I was lucky to encounter a pileated woodpecker and raccoon, both about 30 feet (10m) away from me. Both barely registered (if at all) in the FLIR One image. An interesting aspect of the FLIR One is that it combines the IR image with a higher-resolution visible-light photo to give the resulting image more detail. While I can imagine this being useful for close-range uses (to narrow down the hot-spot in an appliance, for example), and results in neat photos to share on Facebook, it does not help in bird/mammal detection. If anything, the overlaid detail from the photograph of the raccoon probably obscured any IR signature from the raccoon that might have been captured.

Seek Thermal is a small IR camera for both iOS and Android devices, seemed more promising. At $200 apiece (update: now $250) and a workable 208x156 resolution, I was really hoping it would be good enough for birding, and bring this technology to the masses. Unfortunately, field tests have found it to be lacking in range: it shows reasonable detail at close range, but beyond 20 feet the images are just a blur. This is likely due to the lens, which is fairly wide-angled and probably not set up to focus at distance. To its credit, it did highlight a squirrel on a tree about 100 feet (30m) away, though a crow quite a bit closer failed to register (more on crows later).

In January 2015, Seek Thermal released a new XR ("extended range") version of their camera, which brings it a step closer towards being useful for birding. My preliminary review is that it is close, but not quite satisfactory for birding purposes. When pointed at a known hot subject at moderate distance, you can certainly see it in the image, but it does not "stand out" at all; i.e., I would not have been able to "find" the subject. But I suspect that a different color palette could improve this some.
Here is a roosting goldfinch at about 50 feet away:
This bird was first detected at this distance with the Therm-App: 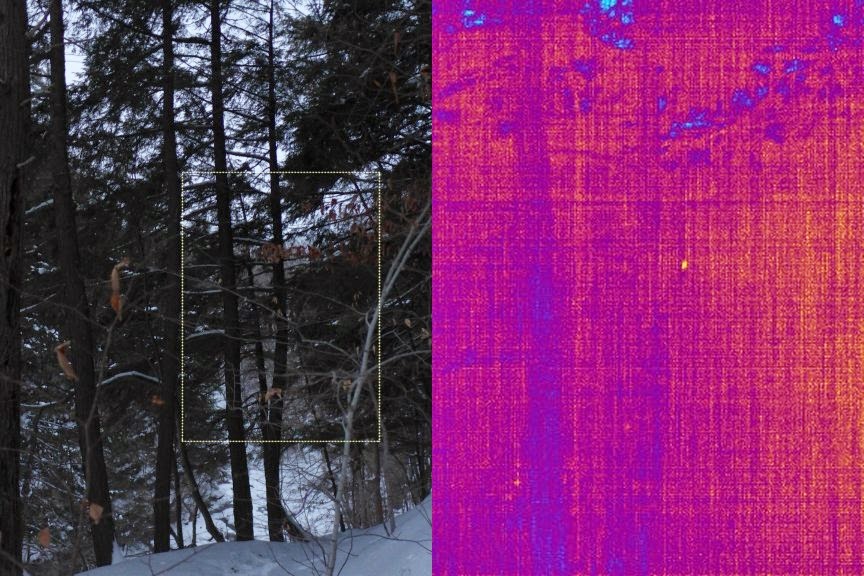 However, in walking closer to the subject (about 20 feet away), the subject does stand out in the Seek Thermal XR, here shown in six of Seek's assortment of palettes. 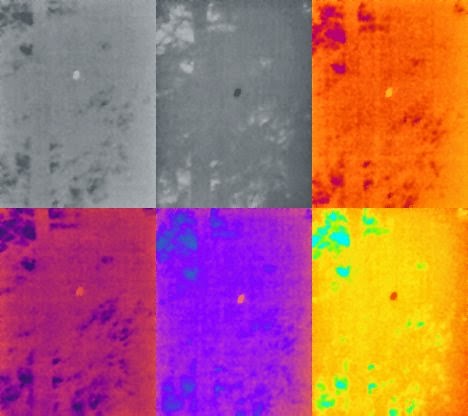 I hope to write a more detailed review soon.

With a 19mm lens and a resolution of 384x288 pixels, Therm-App is the only one of the three devices I've tested that has found things I wouldn't have otherwise noticed. Distant squirrels and raccoons show up as bright yellow spots, as do their roost sites. Birds seem to be better insulated than mammals, but still often register as bright spots. Following a Junco that had flown into a tangled bush, the IR image quickly pointed to a second bird nearby I hadn't noticed. Pointing towards a complaining crow showed the bright form of a red-tailed hawk - but curiously the crow itself did not register, even though I could easily see it with my naked eye. (Several encounters with crows were similarly undetected, leading me to hypothesize that either they're better insulated, or their more absorbent black color radiates less infra-red.)

Unfortunately, this capability comes with a $1600 price tag (I luckily bought mine during a $1000 promotional period), but it at least gives an indication of the minimum specs required for birding. In particular, the Seek would probably do quite well if installed with a lens comparable to the Therm-App’s 19mm (a fairly zoomy lens whose 19x14 degree FOV is comparable to a 60mm lens in a typical SLR). The Therm-App is also only available for newer Android devices (with USB On-The-Go support).